I am currently working on a project where the weft is 2/8 cotton wound doubled.  My bobbins seem to be nicely wound and I have no problem with them until I get about half-way through the bobbin.  Then one of the strands of 2/8 becomes much ‘looser’ than the other and I have to manipulate it in the shed so that it stays in line with the other strand.  Any tips for a better way to wind these bobbins?  Thanks!

This is common when you wind two ends together.  You can get a shuttle that has a place for two bobbins but it still happens because of how the weft turns the corner at the selvedge.  However if you do have a shuttle for two bobbins it is easy to rewind one a little bit every now and then.  This happens because one of the two yarns is always on the outside turning the corner so the inner one gets longer. If you don’t have a double shuttle, the best thing to do to avoid the lengthening of one end is to weave 2 single shots in the same shed.  It does take twice as long to weave but your selvedges can be very clean that way.  If you choose this method you will need a floating warp thread at each selvedge.  Normally I think they are a pain in the you know what, but in this case, it is the only way to control that lengthening stuff. See below for photos showing how I weave with two threads.  The nicest solution is the double shuttle shown in the 2nd photo below:  The first photo illustrates the initial problem. 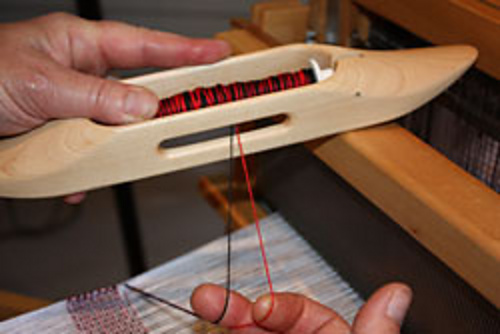 Two threads in one shuttle

This is a photo of the problem…..the red has become longer than the black…because the black was always on the outside when the weft turned the corner at the selvedge.

This is the double shuttle that helps solve the problem and allows you to manage each thread individually.

When the double shuttle comes out of the shed, one bobbin will be on the outside on one side of the warp and on the inside on the other side of the warp.  This means that those two different bobbins alternate being on the outside at the turn of the selvedge.  Sometimes I have to twist my wrist a little to equalize the lengths of the two ends just to keep everything moving along nicely.  Before I throw the shuttle my wrist comes back to even up the length of both ends.