Hope you don’t regret selling me a loom…I’m probably going to drive you mad with questions. I want to do Double Weave — stuffed Double Weave — on the David.  The colour layers alternate. Question 1 I took a draft from a book  …. four harness, Jack.  Here’s my reinterpretation for eight harnesses, also jack. 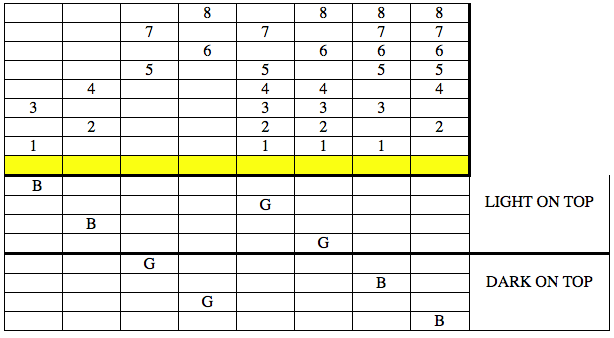 Question 1:  Does this look right? Question 2:  Is there a guidebook or reference that will help me figure out how to convert a jack loom tie-up for the David.. counter-marche?

As you know…when you tie-up something up on your loom the harnesses go down instead of up.  You could use regular tie-ups and your patterns would just weave upside down, which isn’t a problem because you can turn it over when it comes off the loom. If however, you want the top of your weaving to look like what you see in the book, then just tie-up the empty boxes instead of the boxes with the numbers in them….then it will be the same as the picture. example….if the book wants 1 and 2 to go up, you tie-up 3 and 4, which leaves 1 and 2 up :^) Your double weave draft looks perfect to me. I copied your tie-up and changed the white boxes to o’s…..but if you look at it, and compare them,  reading the one with the x’s from the right with yours from the left….they are identical :^) So really they will be the same off the loom.

P.S.  YOUR LOOM ISN’T a Counter-marche loom…..it is a sinking Jack.

You are a genius. I have been under the impression (because someone told me) that the David is some kind of modified counter-marche but was struggling to understand the tie-up because it didn’t jive with that notion. (For my first project, which is simply plain weave,  I just tied it up in a standard twill tie up and hoped for the best.) Now I understand everything!! I can’t tell you how happy I am that you were recommended by Louet as the right place to buy the loom… Thanks again!