This month we shine the Weavers Spotlight on Sharon Broadley! Sharon has taken the ideas from last episode, Season 3 Episode 8 (Simple Supplementary) and overlaid them on all she learned in Season 2’s Colour and Design. Her exploration netted her 7 amazing scarves woven on 2 warps.

It is truly amazing to see where our members have taken the online lessons and created their own designs.

I am so happy to share her beautiful work with you.

I got my first loom along with some ‘how to weave’ books 25 years ago and completed Level 1 of the Canadian Guild of Weavers Master Weave Certificate. I was largely self-taught until moving back to Victoria in 2008. Since then I have taken many workshops through my local Guild, at Maiwa (Vancouver) and with Jane Stafford. Recently, I’ve even had the pleasure of graduating to Jane’s assistant in a couple of her workshops.

I love everything about weaving. If I have to pick just one thing, it is colour interaction. I am fascinated with the way seemingly clashing colours often make the best palettes. Currently I spend most of my weaving time working in plain weave and playing with colour. I like the rhythm of weaving this simple weave structure but I also like that it can be made to look more complicated with a few warp and weft ends added in strategic places or by mixing a number of different fibres together.

Kitchen towels are my go-to project: they provide an excellent canvas for experimentation and in the end they still dry the dishes even if they don’t turn out quite as expected.

Using the colours from the Muted Colour Gamp on Natural Ground from Season 2 – Episode 8, I used 16/2 cotton with 7 gauge Bambu for the supplementary warps sett at 20 epi, I experimented with supplementary ups and downs as per Jane’s lesson.

At the same time I wove square in places and wove with various striping sequences in other spots.

Sometimes my design ‘decisions’ are based upon the fact that my bobbin ran out and I was too lazy to wind another, so just grabbed a bobbin with a different colour from nearby. Having said that, I most often use the Fibonacci numbers. I hemstitched on loom and twisted fringes before washing.

For my second set of scarves, I had just made some towels that reminded me of licorice all-sorts and I really liked the hot pink and orange combo with the tiny black and white stripes; I added apricot for the third main colour.

I made this set of scarves a little wider in the reed and spaced the supplementary warps further apart using watermelon and cerise 7 gauge Bambu.

After I wove 2 scarves in varying striping sequences, I changed out the supps for some fancy ribbon yarn I’d bought on a trip to Linton Tweeds in Carlisle, UK.
This is a mill that weaves fabric for many couture designers, including Chanel, so it is entirely possible that this ribbon once appeared in one of Chanel’s creations.

I used the ribbon warp in a few spots as weft and I love the way the ribbon-y bits got caught in between the wefts and formed teeny tiny loops.

After I’d woven for 20 inches or so, I was worried that the ribbon yarn might be getting too loose and I was also concerned that the ribbon warp might run out before I got the length woven. So several times I got off my bench, went to the back of the loom and gently pulled on the groups of ribbon supps to stretch them out just a bit.  Afterwards I noticed that there was one spot where I might have pulled a little too hard as it seems tighter than the rest of the scarf…but ultimately I don’t think it detracts from the weaving.

I usually weave the first scarf on the warp using the same colours as the warp, but after that anything goes. Many times, as I’ve been weaving, I think oh-oh I’ve gone too far this time but by the time the scarf has been washed and pressed, what looked potentially ugly or just plain wrong on the loom, ends up being my favourite. 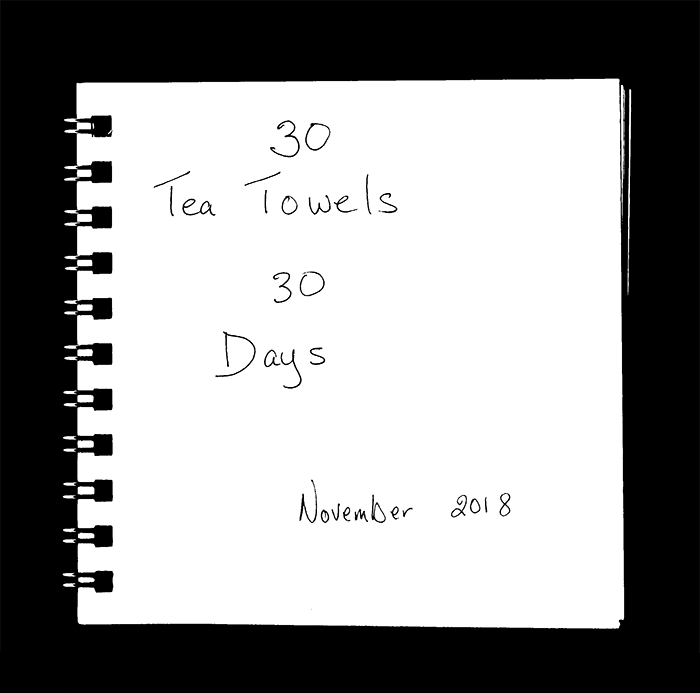 A few days before we broke for Christmas one of my dearest friends and longtime JST employee Susan Brown (25 years) called to say she was coming in to show me something.  She told me a wonderful story and Susan has graciously agreed to share some of it with you.  Once again, it reinforces the lessons in the previous few blogs.  I hope you’re inspired by Susan’s story and you give it a try yourself 🙂

For the month of October an artist friend of mine, Gail Sibley painted 31 paintings in 31 days. Yes, one per day! I was so inspired but I am not a painter. I decided to draw 30 tea towels in 30 days for November. It turned out to be a very worthwhile endeavour. First I went out and found a lovely little square (don’t you just love square) sketch book and then gathered all my pencil crayons. I loved the discipline of drawing one tea towel a day but must confess there was a night or two when bedtime came and no tea towel had appeared in my sketch book for that day. I am happy to tell you that every night but one, I managed to make it happen.

Having taken Jane’s Colour and Design workshop the previous year, I drew on what she had taught in the class. Often I selected a few colours to start with, sometimes outside my usual pallette and then proceeded to work on the graphics. At times I forced myself to try layouts that did not come from my ‘go to’ designs. That was hard but very rewarding most of the time. While drawing a tea towel, the ‘what if’ question often came up which usually led to the following day’s design. Coming up with a different design each day was not always easy but when it wasn’t, I asked myself ‘what if I just changed one element of a previous design’ and presto, there was a new design. 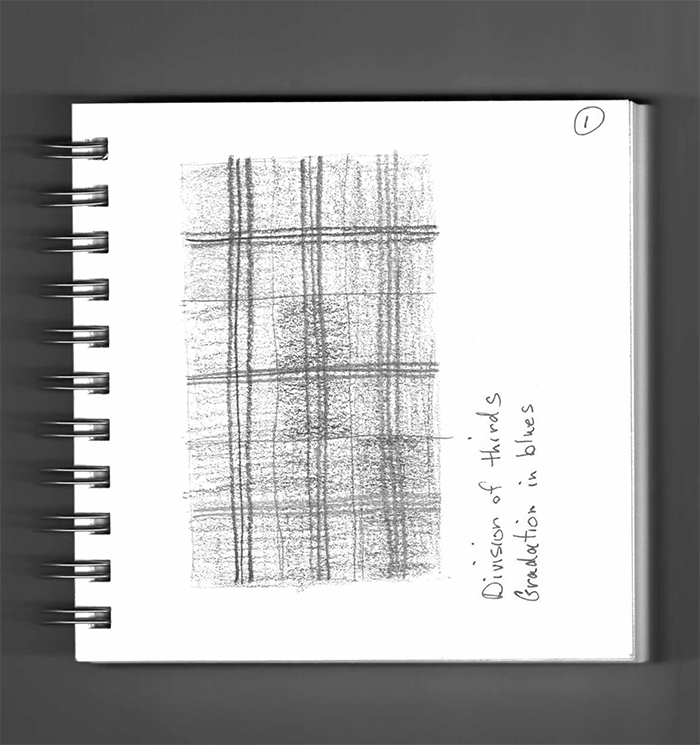 Drawing 30 tea towels in 30 days was fun, challenging, educational, interesting and (as I said), very worthwhile. There are designs that I don’t like so much, but there are definitely designs that I like and some that I can’t wait to try. Who knows, I may do it again or something like it! 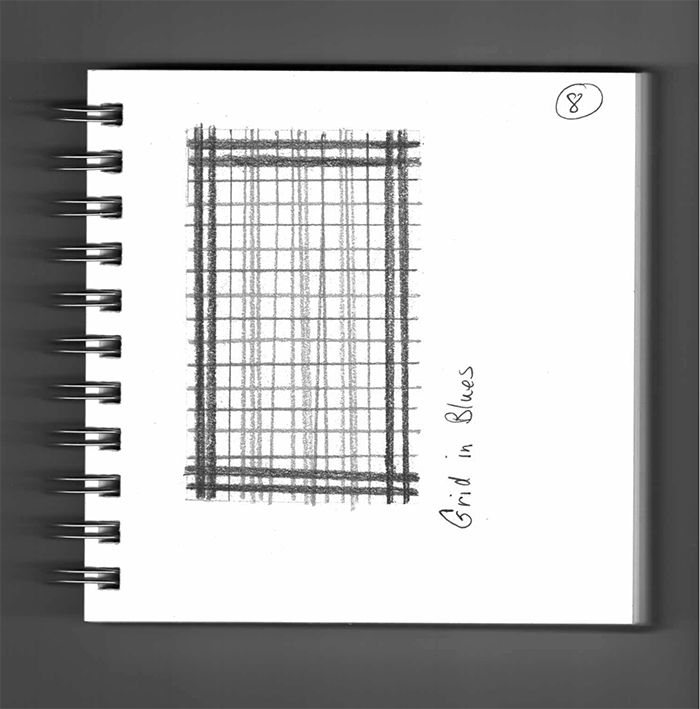 The best part of this challenge is that you can start it any time you like! Don’t be afraid to customize it to fit your own preferences – for instance, if you aren’t  ready to commit to 30 days, try sketching 7 Tea Towel Designs in 7 Days. Who knows, you might enjoy it so much, you decide to keep going!

We’d love to see your design ideas, feel free to share them with us in our Ravelry group or on Instagram using the #janestaffordtextiles hashtag.

Don’t forget to subscribe to our blog & newsletter  to get future posts delivered via email! 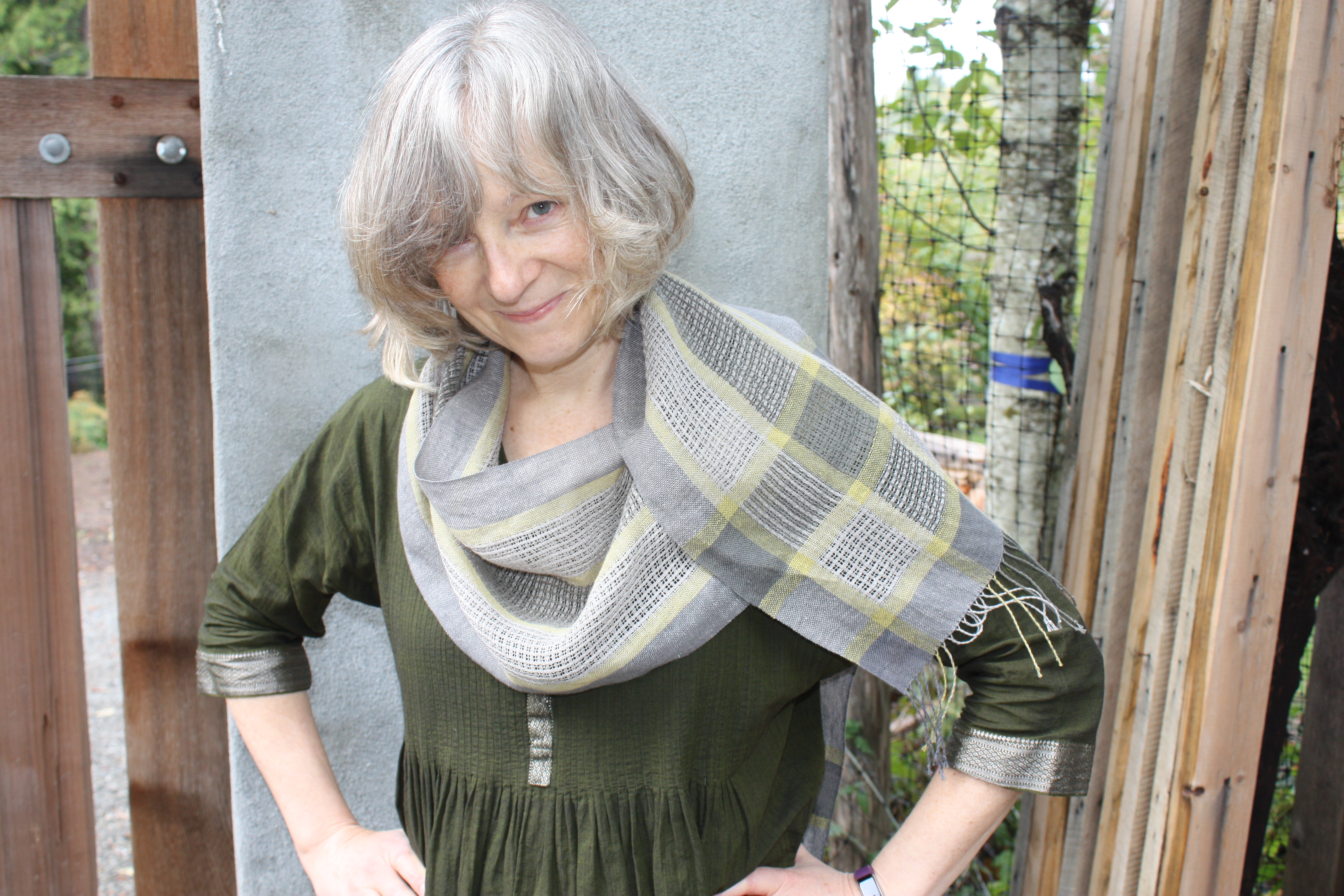 This month we are going to shine the spotlight on one of our JST Online Guild members…the talented Ms. Linda Pickett from Victoria, B.C. Earlier this year, Linda attended our last workshop and brought along some fabulous show and tell. I was so excited that I begged her to let me share 3 of the pieces with you.

She used all the techniques that were presented in the last 3 blog posts. She figured out what her sett was first, then she divided her space and finally she poured in the colour and threading structure.
These 3 pieces are amazing! 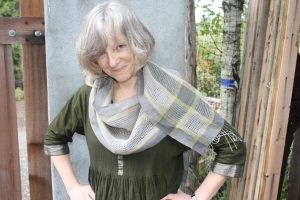 In Linda’s words:
A number of things came together for me this past year.  I think it was partly the online guild, partly that I framed some goals for myself for the year (first time I have done that), partly that I was working with yarns and colours that I like. I was inspired to play, to push things further, to experiment. I have let all this air into my cloth. I experimented with mixing yarns in my cloth that I would never have considered. I am weaving more mindfully (its kinda slow but I am enjoying it), I am doing better at watching the negative space, paying more attention to my technique.  The result is that I wove projects this past year that thrilled me, the most delighted I have been with my weaving since I first threw a shuttle (before I realized that that miraculous cloth closely resembled cardboard). So very exciting.
One of the brilliant things about the online guild is that it is like getting a creative booster shot every month. I certainly didn’t weave everything; I didn’t “keep up” by any means but they always inspire me. Sometimes I almost can’t watch because my brain is too full for more ideas! So fabulous.
‘Blankie’ is woven using Harrisville Shetland in PW at 8 epi and 8 ppi.  Linda pulled one of the Colour and Weave threadings (DDL) from the guild gamp and used it for the body of the blankie. 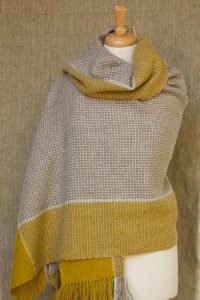 She framed it with a natural zinger line and a solid border. 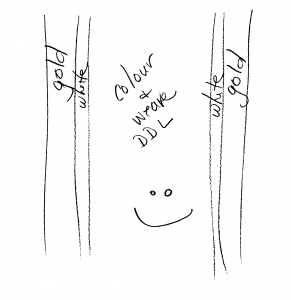 The drape and hand are spectacular and the colour is beautifully soft. 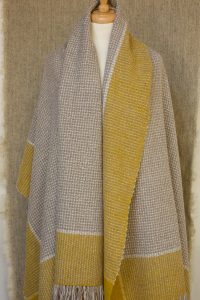 This next shawl is breathtaking; Linda used many of the techniques we learned in 2018. Her canvas was a mix of 18/2 merino for the warp and 16/2 cotton for weft. Woven perfectly balanced at 18 epi and ppi. 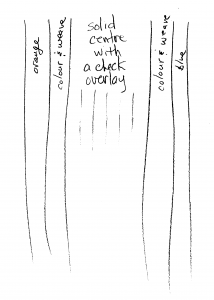 Graphically, she did a division of space in 5, and her outer borders are different widths….there is that asymmetry word again! 🙂 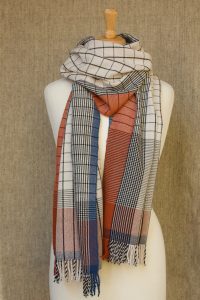 Then she had 2 sections with 4 D, 4 L colour and weave sequence from the gamp in Season 2 episode 4
and the centre section was solid white with a fine over grid of black on it. She put it all together using the ideas from Colour and Design, so naturally I was jumping up and down when she showed me this piece. (You can just imagine!) 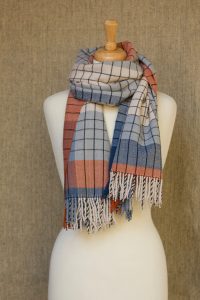 Linda took it all tad further with this beautiful fine 40/2 linen scarf where she inserted some Bronson Lace into the graphic. 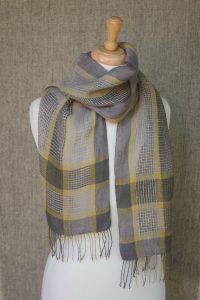 It is so easy to see how the graphic and the sketching helps you get to the warping board quickly: 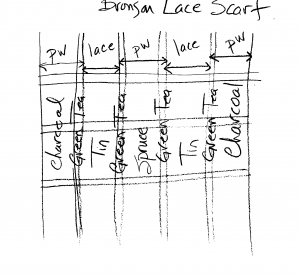 She knew her EPI was going to be 24 because we discussed it based on all the sampling we do around here. She figured out how wide and how long, then she drew her graphic…..got her number of warp threads…fiddled around a wee bit making the lace threading fit (based on Season 1 Episodes 5 and 6),
and then she poured in her colours: 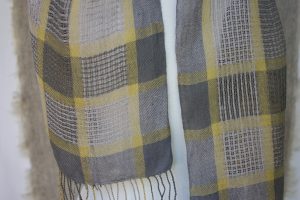 We absolutely adore seeing what our guild members are weaving! Did you know that you can share your projects with our Ravelry Group, and also on Instagram using the #JSTOnlineGuild hashtag?

We look forward to another exciting year of weaving in 2019 – click here to learn more about Season 3: Pushing the Boundaries of Plain Weave. We hope you’ll join us!